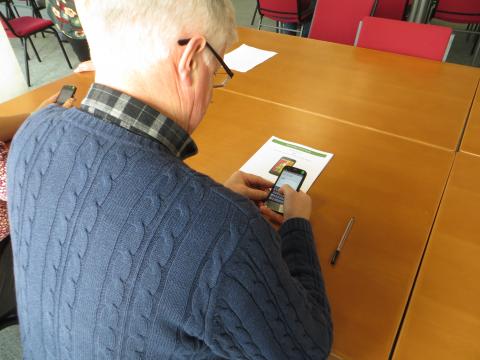 We have released the datasets from our OATS (Empirical investigation & user-centred development of touch-screen text entry methods older adults) project. These datasets contain the results from our text entry studies with mobile touchscreens, with older (and some younger) adults.

The datasets contain a variety of information ranging from qualitative to quantitative data captured with our keyboard prototypes and are provided under a CC-BY license to all interested researchers.

Examples of the data contained in the sets:

Summary:
Our goal was to capture participants’ typing behaviour during input in a lab setting and determine the efficiency of the highlighting keyboard error support mechanism. In this experiment we introduced a new type of experiment, designed to overcome the problem of participants typing in very carefully (i.e. the “injected error” algorithm). The experiment involved both older and younger users, in different sessions.

- Suspects: a “suspect” character is the last character to be deleted by the user after a sequence of one or more backspaces, i.e. one that we consider the user typed in accidentally and then proceeded to delete.
id (int): an id for the suspect entry
sessionid (int): the session in which the suspect was recorded
suspect (text): the suspect character
user (id): the id of the user who initiated the session
folder (text): experiment condition with which this data was generated

TEES data: Data captured from our TEES application. The structure is as follows:
-tees_injected: all submitted data info from TEES
user (int): the TEES user id (generated by TEES)
task_type (text): the type of task undertaken by the user
len (int): total submitted input length
secs_est (int): time in seconds to complete the task, measured from the time of input of the first character
wpm_est (double): calculated words-per-minute for this task
kspc_est (double): calculated keystrokes-per-character for this task
keys_est (double): calculated total number of keys pressed during this task
backspaces (int): number of backspaces pressed during this task
wordCompleteCount (int): number of estimated times the user picked a word from a suggestion bar (more characters input on screen than actually pressed on the keyboard)
wordCompleteAve (double): average number of autocompleted words in this task
autoCorrectCount (int): number of estimated times the user corrected their entry by using autocorrect (letters changed without the user having input any keys)
autoCorrectAve (double): average number of autocorrected words in this task
longestPause (int): time of longest input pause in milliseconds during this task
totalLongish (int): total duration of rather long pauses in milliseconds during this task